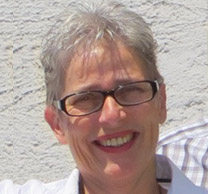 I was born, and lived in Canada, for the first eighteen years of my life. In 1979 I obtained my massage certification and worked as such for the next 10 years. In 1990 I qualified as a Heilpraktiker (Naturopath). It was in 1983 that I was introduced to Kinesiology and did the Touch for Health courses. I followed and attended many more kinesiology workshops, as well as qualifying as a Bio-Resonance Therapist in 1988. I met Carl Ferreri in Leysin, Switzerland in 1994. Thrilled that this technique gave me a complete system that could integrate all my skills I remember standing on the balcony and asking Carl whether his work had been translated into German yet. The rest is history. I had the opportunity to visit New York many times while translating and understanding the technique. In 1995 I followed Carl to Australia where I did my exam and received my teaching permission. I was extremely fortunate in being able to accompany Carl to many international seminars, assisting him and learning from him. I continued working with Carl to make seminar notes as professional and updated as possible. Personally I have taught this discipline in 13 countries and am proud that his notes are available to persons attending courses in German, French, Italian, Portuguese, Dutch and Swedish. May his wonderful work continue.